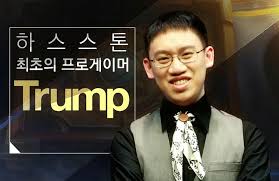 Trump was born on June 28, 1987 in South Bay as an only child. He attended New York University and graduated with a management and finance bachelor's degree in 2009. He moved back to the San Francisco Bay Area until he moved to Texas in mid-2016. He got a job working at a bank and streamed on Twitch.tv for the game Starcraft II in his free time. He soon quit his job to stream full-time. Trump progressed into playing Hearthstone (before known as Hearthstone: Heroes of Warcraft) during the beta phase. He started streaming Hearthstone officially and was soon known as "the world's most famous Hearthstone player". He streams approximately 7 hours a day and attracted tens of thousands of viewers on Twitch. He was signed by Team Razer soon after, making Trump the world's first professional Hearthstone player.

Trump was originally a StarCraft II streamer who later played Hearthstone as side, but his Hearthstone stream eventually gained more popularity. He signed with team Liquid Value in 2014 before leaving later in they year to sign with team SoloMid. Trump stayed on SoloMid until March 2017 where he decided to sign with the well-known Hearthstone team Tempo Storm, whose specialty is creating top tier decks to play for ranked matches and tournaments.